App Authors was a hit at Champaign Library’s Hour of Code!

By kqueal1@illinois.edu on December 3, 2018 in Uncategorized

The App Authors project joined Champaign Public Library in kicking off Computer Science Education week and it was an absolute smash, for both the kids and our staff! We staffed one of the five stations with two activities: participants could either play our “Conditionals with Dice” game or add to our collaborative Play Lab app. 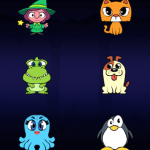 The Play Lab station was a collaborative activity where participants worked together on the app on a laptop, with a library volunteer helping them along the way. The resulting app can be found and played on Code.org! Players act as a ghost, and get different amounts of points for catching different characters.

The IRL Conditionals with Dice game is always a fun time, but the commands this time got crazier than ever! A roll of the dice calls for an action (i.e. “If I roll a three, clap your hands. Else, spin around) and this time the kids gave some truly goofy things for the App Authors staff do to, including disco dancing, singing scales to each table, and even fortune telling.

The three-hour event included several other stations, including a try-it-out Code.org station, a binary station where participants used beads and binary code to make a bracelet with a secret code, a Makey-Makey station, a LittleBits station, and an Ozobots station.

We were thrilled to be part of such an exciting program and to see more kids find success and fun in learning coding concepts and get a chance for hands-on design.

View all posts by kqueal1@illinois.edu →